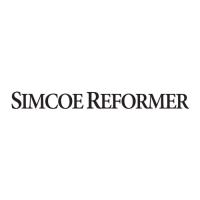 The Simcoe Reformer and PostmediaSolutions delivers advertising and marketing services for businesses of any size across the Postmedia network. From print advertising and custom content, to search and social advertising, website builds and search engine optimization, we achieve your business goals using integrated tactics that maximize impact and investment. For advertising opportunities or to learn more about the Simcoe Reformer marketing services, please visit www.postmediasolutions.com.
The Simcoe Reformer is a daily newspaper serving Norfolk County and Haldimand County along the north shore of Lake Erie in south-central Ontario. Published Tuesday through Friday, The Reformer also manages a robust website -- simcoereformer.ca -- and has an active presence on social media. The Reformer began in 1858 as The Erie News. Three years later, the newspaper was sold to a publisher who renamed it The Norfolk Reformer. At the time, “reformers” stood for liberal political values such as free expression and responsible government. In the mid-19th century, The Norfolk Reformer’s motto was “The Price of Freedom is Eternal Vigilance.” The Pearce publishing family of Waterford, Ont., acquired The Norfolk Reformer and The Simcoe British Canadian in 1922. The papers were amalgamated and The Simcoe Reformer was born. The Simcoe Reformer was publishing twice a week by 1934. This rose to three times a week by 1950. The Simcoe Reformer went daily in 1960. Today, it serves a market area of approximately 110,000 people. The Simcoe Reformer’s coverage area is among the most diversified and productive agricultural districts in all of Canada. The light, sandy soil of Norfolk (pop. 64,000) has helped make the county a national leader in the production of apples, tobacco, berries, ginseng, asparagus, pumpkins, potatoes, cherries and a host of other fruits and vegetables. Simcoe (pop. 14,000) is the county seat and headquarters of this single-tier municipality. Simcoe is a popular regional destination in early October when the Norfolk Agricultural Society stages the Norfolk County Fair, now into its 179th year. Norfolk County also plays host to the wildly popular Friday the 13th motorcycle rallies in Port Dover. These massive events draw as many as 150,000 people from around the world and 15,000 or more motorcycles. The phenomenon is astonishing considering the year-round population of this commercial fishing town is 6,200. Founded in 1981, the rallies have secured Port Dover’s claim as “The Motorcycle Capital of Canada.” Norfolk is also noteworthy for the extent of its forest cover. Unusual in southern Ontario, woodlot accounts for a third of the county’s geography. In 2008, Norfolk County enjoyed a year as “The Forest Capital of Canada.” The 875-acre Backus Woods north of Port Rowan is the jewel in the crown. Backus is the single largest block of Carolinian forest in Canada and will be managed as such in perpetuity by the Nature Conservancy of Canada. Farming in Haldimand (pop. 45,000) is less diversified due to the high clay content of its soil. Livestock is the predominant feature of this production. Cayuga (pop. 1,500) is centrally-located and serves as Haldimand’s county seat. The Simcoe Reformer’s slogan today is “We put local news first.” That sentiment is enshrined in the newspaper’s flag. As the slogan suggests, the day-to-day happenings in Norfolk and Haldimand enjoy pride of place in The Simcoe Reformer, with inside pages and sections carrying content from Postmedia’s talented stable of writers and photographers from across Canada. Over the past 25 years, The Simcoe Reformer has earned a reputation as an incubator of bright young talent. Over the years, Reformer reporters have collected three National Newspaper Awards for Local Reporting as well as a number of provincial awards for journalistic excellence.

There are no reviews for Simcoe Reformer. Write a review now.