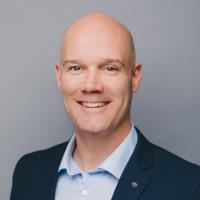 Rob is currently the Chief Operating Officer of ReGen Scientific Inc., a leader in the delivery of personalized medicine. A retired Lieutenant-Commander after 20 years of service with the Royal Canadian Navy, Rob transitioned into leadership roles in the preventative healthcare sector with Medcan as the Vice-President, Talent and then leading the growth of ReGen Scientific.

Very active in support of veterans, Rob is the head of the Treble Victor Group’s Toronto chapter, which brings military veterans together to support one another in a second career. He also actively supported Toronto’s Invictus Games in 2017, working with Team Canada’s alumni to determine methods to better support veterans after service and participation in significant sporting events, such as Invictus.

Originally from Stellarton, Nova Scotia, Rob graduated from the Royal Military College (RMC) and served in several of Her Majesty’s Canadian Ships, including a deployment to the Arabian Gulf immediately after the September 11 events. Rob specialized as an Anti-Submarine Warfare Officer and ship’s diver. In 2012 he completed his Masters Degree in Industrial/Organizational Psychology and Business Administration, from Saint Mary’s University in Halifax. Among other roles, Rob completed his military career as an Associate Professor of Leadership and Psychology at RMC.

In 2016, Rob joined his uncle and company founder, Dr. Bob Francis, at Medcan. After learning the industry, he became the company’s first Vice-President of Talent as the company grew to over 500 employees and close to 100 medical professionals. Medcan was established more than 30 years ago and is a global leader in assessing their clients’ overall well-being. While there, Medcan was recognized for overall business performance and sustained growth with the prestigious Canada’s Best Managed Companies designation.

There are no reviews for Rob Francis. Write a review now.