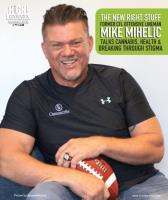 Michael Mihelic is working with Cannascribe Medical Marijuana Prescriptions. Over a period of time, they were able to help thousands of patients obtain their medical licenses to produce and obtain medical cannabis from licensed suppliers. The company is known as one of Canada's longest standing grassroots services assisting patients with cannabis for medical purposes.

Mihelic had a career in the Canadian Football League for 10 years. Although his senior year brought the possibility of a professional career in NFL, he suffered a career-ending career which eventually redirected to the CFL. After resorting to medical cannabis for his treatment, he no longer needed to go back to his traditional post-game pharma concoctions. Its natural anti-inflammatory properties have succeeded in treating his major injuries and improved his health.

Today, Mike Mihelic sits as the Vice President of IS Investment. The investment bank was founded in 1996 in Istanbul and has since offered an array of financial services to local and foreign investors. It currently has 10 branches across Turkey and proudly represents a large and commanding presence in the Turkish investment market.

There are no reviews for Mike Mihelic. Write a review now.