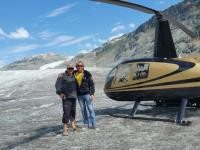 The world knows Denis Vincent Helico as a man of success. Denis is best known for his undertakings in the aviation industry. Apart from being a trained pilot, he has also built Heli Vincent Inc from the ground up and has made it a big name in the aviation world. The company mainly deals in airplane and helicopter leasing and sales in Quebec, Alberta and British Columbia. He is also known for his work in the real estate world. The real estate industry has experienced many jolts in the past few years, but Denis and his team have ensured the best practices, not just for his company but also for everyone associated with the deals. He has also worked extensively on mergers and acquisitions in a significant way.

There are no reviews for Denis Vincent - Helicopter & Airplane Pilot. Write a review now.